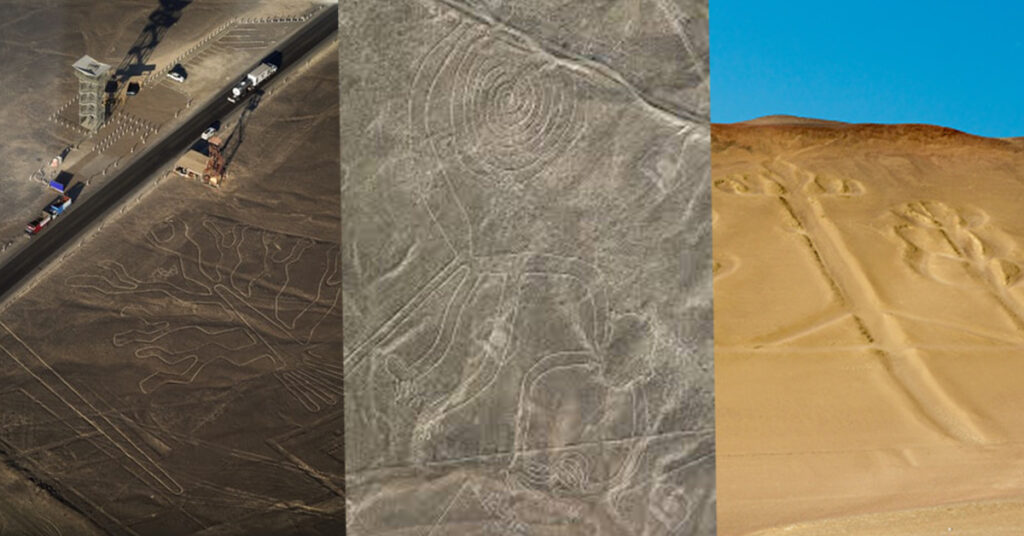 From Machu Picchu in Peru, or The Eastern Island in Chile, or The Angel Falls of Venezuela, these places have always been on my bucket list.

However, one place which tops it is the Nazca lines of Peru.

They are situated 200 miles South Of Lima. Discovered only in the 1930s

From where they came? Who made them? What was their purpose? What are the NAZCA LINE THEORIES? ARE QUESTIONS THAT DON’T HAVE ANY ANSWERS.

The Nazca lines of Peru are a series of ancient Geoglyphs -{ A geoglyph is a broad pattern or motif created on the ground by clastic rocks or similarly durable landscape elements such as stones, stone fragments, gravel, or earth (generally longer than 4 metres) located in the Nazca desert. They depict living creatures, plants, and imaginary beings and run in 500 sq kilometers.}

Here, in these massive patterns on the ground, I noticed a MANDALA. It is a circular design that symbolizes that life is eternal. Mandala is the Sanskrit word for ‘Circle.’

What is the shape of the Shivling?

If you think I am hell-bent on proving that Hinduism existed worldwide, then this is a fact, and various theories exist. But Latin America plays a significant role in the existence of Hinduism.

How and why all these questions I will answer in the subsequent articles.

The shape of a Shivling is oval. The MANDALA IN THE NAZCA LINES OF PERU IS OVAL. But the question is, doesn’t the MANDALA RELATE TO BUDDHISM? THEN HOW AM I RELATING IT TO HINDUISM?

Before the Buddhist began using the MANDALA, it existed in HINDUISM IN THE TRIKA SHAIVISM, representing the five powers of Shiva. These days, the MANDALA is a symbol in Indian religion representing wholeness. AND HINDU’S WERE THE FIRST PEOPLE TO USE THE MANDALA. The MANDALA’S basic shape is a square with four gates and a circle with a centre point. Hence, Mandalas originated in Hinduism as a spiritual tool and not in Buddhism, as we all believe.

In ancient times, Kashmir was the spiritual centre for some of the most sophisticated spiritual practitioners. Kashmir Śaivism arose from the experience of these dedicated Trika Yoga practisers, who practiced through MANDALAS. Hence,  I would like to point out that in the Nazca lines of Peru, there is TRISHUL (TRIDENT)

There are various Nazca line theories regarding these lines’ origin, but the one I find the most logical is Tony Morrison, the English explorer. He believed by researching the old folkways of Andes mountains’ inhabitants, Morrison discovered wayside shrines linked by straight pathways. The believers would move from shrine to shrine, praying and meditating. These shrines were as simple as a pile of stones. He feels the Nazca Lines of Peru were for the same purpose on a large scale. And the lines served as a simple enclosure for religious ceremonies.

To understand this concept of the NAZCA LINES AND THE NAZCA LINE THEORIES, which are a mystery in themselves, we have to see the bigger picture of HINDUISM FLOURISHING IN LATIN AMERICA.

In Peru, archaeologists have unearthed a 5000 years old temple at the El Paraiso, located near Lima. It is a stone structure not very big, with walls painted in yellow clay, and there are traces of red paint. This temple of fire is the HAVAN KUND WHICH THE INDIANS USE. {Havan Kund is the central location where the fire is lit, and all the offerings are made. For a Yajna, it could be compared to a sanctum sanctorum.} And this HAVAN KUND RESEMBLES THE SHAPE OF THE MANDALA WITH THE FOUR GATES.

THE PRESENCE OF HINDUISM IN PERU -THE LAND OF THE INCAS.

Incas, or the Incan Empire, was the strongest and the most prominent Latin American empire. And the name Inca came from Ina, and it connects with the Sanskrit word of the Sun God, and the Incas called themselves the descendant of the Sun God. LORD RAM IS CALLED AS INAKULA TILAKA. Another similarity is if we open the doors to the ancient language of the Incans, Quichua it has many Sanskrit words like INTI, WHICH MEANS THE SUN IN BOTH LANGUAGES.

Coming back to the point of the TRIDENT – IN THE NAZCA LINES.

Called the PARACAS CANDELABRA, also named as the CANDELABRA OF THE ANDES OR THE TRIDENT OF PERU. We have to understand the Ramayana here. Only then can we understand the presence of HINDUISM IN THE NAZCA LINES OF PERU. As per the Indian Mythology and mythological stories of the Ramayana, Sugreeva directs his army of Vanaras {Monkeys} to go in all directions to search for Goddess Sita the wife of Lord Rama. To one of the groups of Vanaras, he says that you must look for a trident etched on top of a mountain. And the fact is, the trident in the Nazca Lines of Peru is etched on top of a mountain.

In THE NAZCA LINES OF PERU, there is a figure of a MONKEY.

You would say I would relate it to Lord Hanuman.- {The Indian Monkey God}

There are Rahu, Shiva, Ganesha temples in Latin America.

This Indian Mythological story can be used as one of the theories of HOW HINDUISM REACHED LATIN AMERICA AND CAN BE USED AS NAZCA LINE THEORIES.

Lord Hanuman travelled through a lotus stem-shaped tunnel to Patal Lok,{the heavens below}, South America. Now, if you see it logically, he went down under India. Down under is South America. During the battle of Rama {the Indian God} and Ravana- {the antagonist in the story, the multiheaded demon king.} Mahiravana, the maternal uncle of Ravana, kidnaps Lord Rama and Lakshmana, the brother of Rama, and takes them to Patal Loka through a tunnel. As we know, Patal Loka is described below the earth, and as per Hinduism and Hindu Mythological stories, one has to go 70,000 yojanas deeper. Latin America is below India, so the tunnel led them there. Hence, Hindu Gods were worshipped in Latin America.

Conclusion– The Nazca lines of Peru were made as a symbol of faith or protection. But how do you feel protected? How does one have the confidence that nothing wrong will happen to me? These lines symbolize life. Lines always demarcate. In the mystery of these lines, those unknown makers of it felt safe.

0 Replies to “Are The Nazca Lines Of Peru Part Of Hinduism? How Did Hinduism Reach Latin America?”