Whether it is Seth, the famous Egyptian God, or Ra, the Sun God Of Egypt, and the most powerful Egyptian God, Egypt and Egyptian Mythology have always enchanted me and been like that old treasure box. Every time I have found something different. Cairo, Alexandria, Luxor are not places for me, but cities that have left me spellbound by their mysteries.

The rugged, raw buildings of Egypt aren’t meant for the ones who love stylish and glamorous places like Times Square. Here the desert sand is still wild and does not shy to smear you.

The place which I want to go back to is the Valley Of The Kings- Luxor. A massive graveyard of the Pharaohs and royalty, hidden in the barren land. Where the tombs were more of a symbol of the afterlife than the lives, these Kings lived. My research on Egyptian religion, Egyptian Mythology, and Egyptian Gods started when I saw a broken storage vase with Tamil Brahmi script excavated at Quseir-Al-Qadim. It is on the Red Sea coast of Egypt. It dates back to the first century BC.

It led me to think, are there similarities between the Hindu Gods and the Egyptian Gods? In other words, Hindu Mythology and Egyptian mythology?

As per Egyptian Mythology, the Egyptian Gods’ Pantheon is as vast and as big as our Hindu Pantheon.

Both are polytheistic- Mains Hindu Gods Brahma, Vishnu, And Shiva.

1.   Both have holy books- The Vedas for the hymns and prayers. The Book Of the Dead for the Egyptians.

2.   In both cultures, the human role on earth is for the preparation of the afterlife.

As per Egyptian Mythology, Egyptians believed in three types of the afterlife.

1.Belief in an underworld.

Egyptians always believed in immortality and death was a temporary interruption and not cessation of life. They mummified the dead so that the soul would return to the body giving it breath and life, provided everything from clothes to utensils in the tomb for the afterlife. Here the dead person they believed passed through an underworld filled with dangerous animals.

According to Egyptian Mythology, on arriving in Duat or the Gods’ land, the dead had to pass through 7 gates before arriving at the hall of Osiris, is the Egyptian God of the underworld. Here Gods weighed the dead person’s heart. Forty-two gods listened to the deceased person’s confession. Then the God Anubis, the God with the Jackal’s head, weighed the dead person’s heart against an ostrich feather. The weighing scale was imbalanced. Ammit would devour the soul. Ammit’s body was part lion, hippopotamus, and crocodile—the three largest “man-eating” animals known to ancient Egyptians. And if the soul passed the test, it joined Osiris in paradise.

The same is our belief in Hinduism, where there are fourteen worlds in the universe. The seven upper and seven lower. The soul is immortal and imperishable. The Hindus’ heaven is the place where the departed soul goes to reap the fruits of their virtuous deeds. They remain there till the fruits of righteous actions are exhausted, and then they come back to earth.

But in case your soul has done evil deeds, you land in hell.

Hell, the land of Yama, for Hinduism, is a particular locality walled off from the surrounding regions of space by the messengers of Yama. Sinners are punished here before being born again. The soul enters the gateway of heaven or hell by the good and bad deeds. The concept of DEEDS and HEAVEN AND HELL and HOW THE SOUL is treated is common in both religions.

Both were Pagan religions with a deep love for mother nature, whether it is our Ganga in India or the Nile in Egypt.

Now, the critical question- Does the King of Hindu Gods Lord Shiva rule in Egypt?

The Shivling represents Lord Shiva, and the Egyptian Ankh represents life. Both have a similar shape, the circle in the center, which signifies the universe. The representation of Shiva and Parvati is the Shivling in India.

The Ankh and how did it originate is a mystery for Egyptologists. All Egyptian Gods carry the Ankh. It is called the symbol of life and fertility. We don’t know how the Shivling originated.

Ankh gave energy to the Gods, so does the Shiviling stone radiate energy.

Though the Pharaoh (king) considered himself God, the most powerful God in Egypt is Amun, the God of the Sun and air. Shiva is the most powerful Hindu God. Shiva is called Som_Suryagni_ Lochana means the Sun’s energy is Shiva. “Akhannddam Bhaje Bhaanu_Koti Prakashamm” has the brightness of million suns.

Whether it is the

1.   The third eye concept in Hinduism is similar to the Eye of Horus for Egyptians.

2.   The Pyramid Structure is like the cone roof of our Hindu Temples because both believed that the world above is where the Gods reside. It was because the vast sky was visible to them with the stars and its beauty. The earth below meant hell because it was concealed in layers.

3.Another vital link that I can think of is the concept of swallowing of the Sun-

Ra- the Sun God of Egypt, the solar deity. In Egyptian Mythology, Apep was viewed as the greatest enemy of the Egyptian Sun God Ra and the Lord of Chaos. Apep was a giant snake, and Apep swallows the Sun during a battle.

In Hinduism and Hindu Mythology, Rahu is the demon God with a serpent head, and he as well swallows the Sun.

The similarities are unending. Max Muller also commented that Egyptian and Greek mythology is based on Vedic tradition.

But to us, after so many years, the question is How?

If India was part of the Supercontinent Gondwana and Africa, Australia, Antarctica, and South America, it all broke up. Does this hold the key to the similarities?

Another question that comes to my mind is, do we feel proud that in the distant lands we see Hinduism? The bigger question is, what is Hinduism?

A ritual which we do every day in front of photographs? Or is it a philosophy that we need to understand?

Only if we could understand the hell and heaven in both the worlds was created for us to behave well in this life. A life we can see and witness, at least then, we would have been happier in this life because what lies beyond this birth will always remain a mystery.

0 Replies to “Are Egyptian Gods Our Hindu Gods?- Know The Facts About Egyptian Mythology.” 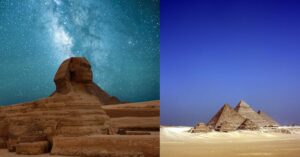 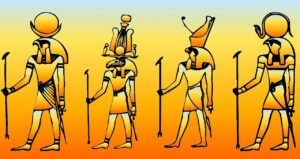 The Raga of The Egyptian Gods – How did they come into existence? Who was the first Pharaoh? (Egyptian mythology)