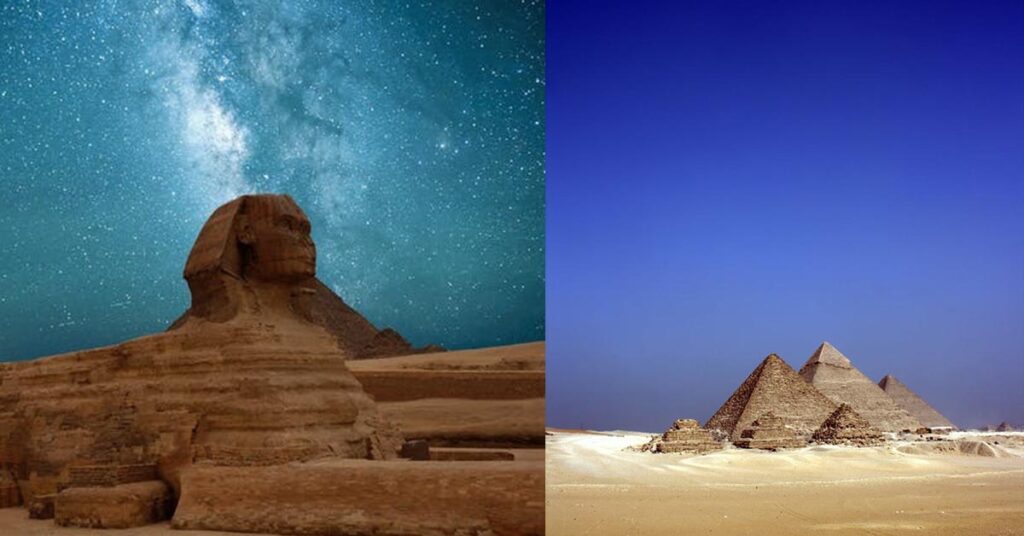 There is evidence about the Shrimad Bhagwat Geeta in the Egyptian Pyramids.  In one of the Pyramids, dating back to 3000 BC, a verse from the second chapter of the Bhagavad Gita was found inscribed.

The verse of Nainam Chindanthi is written in an Egyptian pyramid in a non Devanagri script.

The Translation is – The soul can never be cut to pieces by any weapon, nor burned by fire, nor moistened by water, nor withered by the wind.

How is it possible that a PYRAMID HAS THE BHAGWAT GEETA IN IT?

The name Egypt comes from the shortened term of Ajax. It refers to the Indian word Ajapati, which means Lord Rama, because they were descendants of the Aja family. Aja was the grandfather of Lord Rama, as mentioned in the book of Shrimad Bhagwat Geeta. We can’t overlook the fact that the Egyptian Pharaohs had such titles as Rameses the Great or I was a paramount ruler in Egyptian history. Ramesses means Rama the God. And we cannot forget that Egyptians took their kings as descendants of God.

In our books, when we read about Egypt, its extent had contracted with the natural depression

of the Nile River. In a revolt against the Pharaohs, the Jews rose. In Palestine, they were imprisoned, leading to a grudge against their forebears in Aryavarta and Egypt. (India was also known as Aryavarta, meaning the land of Aryans). They developed a feeling of destruction, and their main goal was to rewrite history.

They rejected the past and even reversed the natural mode of writing from left to right. The Egyptians and also the Greeks retained their ancestors’ doctrine.

When the trade route over the Nile flourished, it brought with it the exchange of books and writings. The Shrimad Bhagwat Geeta was brought to Egypt. The scared writing is a treasure house that can help awaken our planet. And the book is meant for all humans in general.

What are the ancient similarities between India and Egypt?

Other similarities are within the names.

In Egyptian Mythology, the name of the most important Egyptian God is Ra, the Sun God of Egypt. The name comes from Ravi, the Indian name for the Sun God. Heru (Horus is the Greek pronunciation) or Nar Heru comes from Hari, the Indian name for the Supreme or Vishnu. Nar Heru is named Naar Ari in Hebrew, the NARA Hari in India, another name of Vishnu or Krishna in Bhagwat Geeta.

How does the Vedic SHULBA SUTRA reflect in the Egyptian Pyramids and Egyptian Mythology? And what is the SHULBA SUTRA?

Egyptian Civilization developed rapidly from primitive to advanced, around 3000 BCE. However, previous to this time frame, the various development stages of the  Egyptian Civilization could be challenging to analyze with limited information. Some students feel that the primary Pyramid designed, that is, the Step pyramid at Sakkara, thirty miles south of El Giza, was made 5000 years past, whereas other historians think it dates back to 2650 BCE. The right Pyramid of Cheops at El Giza is designed around 2900 or 2800 BCE.

In Egyptian mythology and history, the Pyramid of Saqqara is the Step Pyramid, the tomb of the third Dynasty ruler Djoser or Zoser, built by Imhotep and thought to be the earliest central stone structure erected in Egypt.

What ensures the time of construction of the right Pyramid at El Giza is the King’s Chamber’s southern shaft pointed up in the sky directly at Orion’s belt, wherever it might be located around 2500 BCE. The pyramids’ arrangement and positioning on the Egyptian sand instantly replicated the stars’ formations in Orion’s belt. The aim was when the Pharaoh died, and the shaft would facilitate the soul’s purpose thanks to Orion’s celebrities. Ancient Egyptians thought the stars in the belt represented the resting place of God Osiris’s soul. Osiris is the God of the Dead in Egyptian Mythology.  And would help them to succeed to become an Egyptian deity in the sky. They will be immortal, and the truth was this is what the Pharaohs wanted. Anyway, this shows the Pyramid was designed by 2500 BCE.

The construction of the right Pyramid demonstrates the characteristics of a complex society that includes several mathematical formulas in its structure. The only alternative Civilization that had information about such advanced arithmetic at this stage was the Asian nation.

altars and their influence. The major Shulba

Sutras, mathematically the most significant, are attributed to Baudhayana, Manava, Apastamba, and Katyayana. Their language is late Vedic Sanskrit, and these sutras were composed around the 1st millennium BCE. Hence, one thing is for sure that the Shulba Sutra had a significant role in the construction of these Pyramids and the altars. And it leads us to the point that the descendants of Puru were the Puranas. Later, they were called the  Pharaohs of Egypt.

In Hindu Mythology, Yayati was a Chandravanshi king. He was one of the ancestors of Pandavas and Yaduvanshis. He married Devayani.

Yayati’s story finds strong roots in the development of Judaism and its link with ancient Egypt.

When we study or analyze Egyptian history or Egyptian Mythology, we have to keep in mind the soul of Egyptian Mythology apart from the advancement the Civilization achieved. The Pyramids are mausoleums. They are SYMBOLS OF FAITH.

How did the Indian Texts reach Egypt?

There is a possibility the survivors from the sunken town of Dwaraka sailed across the ocean to the continent. Or the Egyptians would have traveled North towards the Indus natural depression where another advanced society thrived. The native inhabitants exchanged their knowledge with them—the Bhagwat Geeta

. We have to keep in mind what Waddell claims: The first Aryan king became the predynastic Pharaoh of Egypt. According to this version, the family of Puru became the Pharaohs of Egypt.

Another interesting fact that I would like to share is, there is a belief that the Egyptian pyramids were designed to guide planes or spaceships. And in religious writing like the  Bhagwat Geeta, there are several references to the flying vehicles. As per Hindu Mythology, the story of Vimanas is widespread and existed 5000 years ago.

Conclusion – We cannot ignore the similarity between Egyptian Mythology and Indian Mythology. THE EGYPTIAN ANKH AND THE SHIVLING. OR THE WHOLE CONCEPT OF THE AFTERLIFE.

The Egyptian Book of the Dead is a collection of spells that enable the deceased’s soul to navigate the afterlife. In Egyptian Mythology, “THE SOUL LIVES FOREVER.” AND THE MEANING OF NAINAM CHINDANTHI OF THE BHAGWAT GEETA IS THE SAME THAT THE SOUL CAN NEVER BE DESTROYED. AREN’T THEY THE TWO SIDES OF THE SAME COIN? 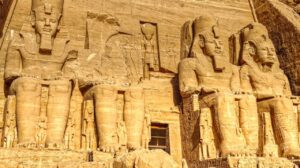 Are Egyptian Gods Our Hindu Gods?- Know The Facts About Egyptian Mythology.

The Raga of The Egyptian Gods – How did they come into existence? Who was the first Pharaoh? (Egyptian mythology)