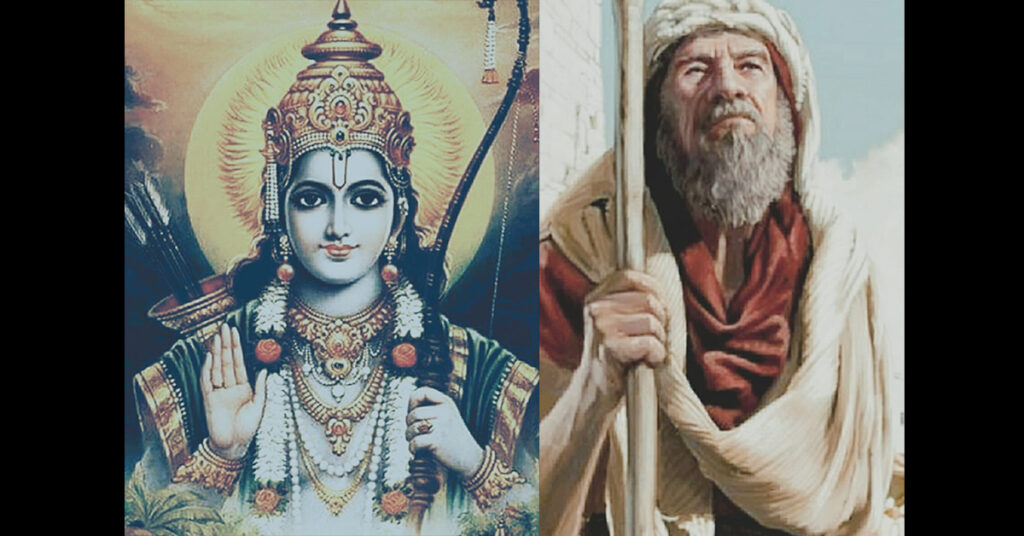 When we analyze and study God Ram of Valmiki’s Ramayana in Indian Mythology and Abraham of the Bible. You will see that it is the same story narrated with few minor changes.

In Indian Mythology and Valmiki’s Ramayana‘s mythological story, Lord Ram’s father is King Dasharatha, and he married Kaikeyi. A king who remained true to his words by sending his son Lord Ram to 14 years of exile in the forest. (Lord Ram is the main protagonist of Valmiki’s Ramayana ) His wife Sita and his brother Lakshman accompanied him.

About Abraham of the Bible, we see how God is the supreme power. He orders Abraham to leave his father, Terah’s house- (Terah- is a biblical character in the Book of Genesis. He is mentioned as the son of Nahor and father of the patriarch Abraham).

And for his family, Abraham agreed to get another land. He follows the instruction and does what he has been told to do. He leaves Terah’s house with his wife Sarah and goes to another country because God wanted it this way.

From these two above examples, don’t you see that there is a similarity in the beginnings?

Both Abraham and Lord Ram have to leave their fathers’ houses with their wives on the command of a supreme power which they respect.

Now, the question you will ask is – How can the context of the two intersect?

For this, we will have to unfold a few points.

After Ram’s return to his city Ayodhya (where Lord Ram left for his 14-year exile journey into the forest).  In the Indian Mythological story of Valmiki Ramayana, we see a confrontation because of Durvasana, a sage. In the end, to fulfill his brother’s vow, Lakshman goes to the Sarayu River and dies. Lakshman is the incarnation of Sheh-Naag, on whom Lord Vishnu rests. It was important for Lakshman to die before Ram. When Lord Ram gives up his life and returns as Vishnu to Vaikunth, his seat is already ready.

In Bible, there is something similar. As Abraham of the Bible returns to Ai, he faces conflict with the Lord. And their herdsmen fight, which led to their separation. The narrative is the same as based on CONFLICT AND SEPARATION ONLY THE CONTEXT DIFFERS.

Abraham has eight sons – But the two famous sons are – Ismail and Ishaq.

In Islam, Ismail (Ishmael) is seen as a prophet (nabi), and he is the ancestor to Muhammad. Later, he is linked to Mecca and the construction of the Kaaba.

Ishaq (Isaac) is seen as a prophet and messenger of God by Muslims. As in Judaism and Christianity, Islam maintains that Isaac was the patriarch and prophet. Abraham’s son from his wife, Sarah.

Sita took refuge in the ashram of a sage named Valmiki, situated in a forest on the Tamsa river banks, after being exiled from Ayodhya. There, Luv (Lava) and Kush were born.

Now you might question -Is Sita and Sarah’s narrative the same?

Both Sarah and Sita followed their husbands in exile. –THE KIDNAPPINGS  ARE COMMON IN BOTH THE NARRATIVES.

The king of Egypt, a Pharaoh, believed Sarah was unmarried and abducted her. Sita was kidnapped by Ravana, the King of Lanka and the chief antagonist in the Indian Mythological story of Valmiki’s Ramayana. Nevertheless, both women were freed. Once the Pharaoh learned Sarah was married, the Pharaoh left Sarah, and Ravana already knew Sita had been married to Ram. And Lord Ram rescued Sita. But here, the more significant question is that we can

‘t overlook the resemblance. The Pharaoh is also called Firaun, another interesting fact that comes to light. In the Arabic language, Ravan remains if Firaun’s ‘FA’ is

You can even say that coincidences are common, and this is just another one. Coincidence? I don’t think so. Here, I respect your point, but I can’t entirely agree with it.

God orders Abraham in the Bible to sacrifice his only son on Mount Moriah when an angel comes and replaces Issac Abraham’s son with a ram.

Lord Ram is ordered in Ramayana to sacrifice his horse. He calls Sita to the place of sacrifice when he hears the songs of creation. Don’t you think there is some link here? But more information would have confirm

When Sarah died, Abraham came to mourn for her death, and when the earth took Sita, she was called from the Valmiki ashram. It is clear that when the wives of the two men (Abraham and Lord Ram)  died, they were not with their husbands.- Before or during death.

One of the interesting facts that you can’t ignore is the name. The Abraham of the Bible was originally named Abram, which means Father Ram in Hebrew literature.

According to the scripture, the Vanar Sena, also called the monkey army, helped Ram in rescuing Sita, and they are also seen as the Black African tribe, which Lord Ram met during his exile.

We find a similarity here, and we can’t overlook the fact that some people migrated to India after Abraham’s death and brought with them the story. And it is believed that parts of these stories became associated with Indian places.

The origin of the Aryans is known to be from Iran, and they came to India.

In connection with Abraham/Ram’s origin in Iraq, we cannot ignore the possibility that his story came to India with the Aryans. And we also have to accept that nothing much is known to Indians about the history of Lord Ram.

Some castes trace Luv and Kush to their ancestors. But with those origins, there is neither a dominant caste nor any evidence. It seems to be that they lost contact with the descendants of Ram/Abraham when the Aryans migrated to India. On the other hand, in Arabia and other parts of West Asia, most of them trace their origin to Abraham and his sons. Isaac, David, Solomon, Jesus, etc.

Going back to the question- Is Ram of Valmiki the same as Abraham of the Bible?

At many points, the narrative of the two stories seems similar.  Lord Ram is considered the incarnation of Lord Vishnu and Abraham, is called the father of many nations. If you study them, you will see they have different origins. But the similarities fit into each other so well. They both came from different sides of the world and ended at another place. If we research the description of sites given to Vanar Sena by Sugriva in different directions, this description does not match Ayodhya. But if we place it around Egypt (see the old maps in the books of the Bible), it’s consistent.

What surprises me is the question – everything is not a coincidence in life. HOW CAN THERE BE SIMILARITIES TO SUCH A LEVEL? I am leaving it for you to decide.

0 Replies to “Is Ram of Valmiki Ramayana the same as Abraham of the Bible?” 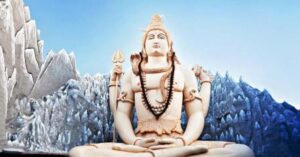 Is Corona significant of Lord Shiva Opening His Third Eye?