If you don’t know who is the Jade Emperor, then you should first read my article. – WHO IS THE JADE EMPEROR? WHY IS HE THE MOST IMPORTANT CHINESE GOD? (UNDER CHINESE MYTHOLOGY).

In Chinese Mythology and Chinese Mythological Stories, JADE EMPEROR IS THE MOST POWERFUL AND MOST IMPORTANT GOD IN CHINA. In short, he is the King of Heaven, Earth and Under World.  Just like Lord Shiva in Hindu Mythology and Mythological Stories, is the King of the Hindu Pantheon of Gods. And the most important God. – BUT MY QUESTION HERE IS – IS THE JADE EMPEROR OF CHINA THE HINDU GOD LORD SHIVA? DOES THIS CONNECT HAVE AN ANSWER IN THE FACT HINDUISM FLOURISHED IN CHINA.  For this, you would need to read this whole article.

In Chinese Mythology and Mythological stories, Jade Emperor was called the Heavenly Grandfather. As Earth was a difficult place to live, Jade Emperor acted as the saviour of Gods and Humans protecting them from devils and demons. Here, one can point out the similarity of the story- the Jade emperor defeated the demon to save heaven and the Gods. Lord Shiva also defeated the demons to save the Gods.

If we go back to medieval Chinese history, Lord Shiva, Vishnu, Ganesha, Maa Kali were worshipped in different provinces of China. Hinduism was profoundly present in the 6th Century in China, that the royal family of China had a Hindu lineage for two generations.

BUT IS THE ANSWER IN THE FACT INDUS VALLEY CIVILIZATION PREDATED THE CHINESE CIVILIZATION.  DOES THIS ESTABLISH THE CONNECT OF HINDUISM IN CHINA? – For this we have to look at the famous SEAL 420 where a horned figure sits in a yogic posture, surrounded by animals. It indicates Lord Shiva worship. The other name of the seal is the PASHUPATI SEAL. And Lord Shiva is called PASHUPATI- THE LORD OF THE ANIMALS.

Here, we must also take into consideration the fact in Chinese Mythology and Mythological stories, the JADE EMPEROR was the one who chose the order of the animals for the Chinese Zodiac.  Hence, the link of LORD SHIVA WITH ANIMALS AND THE JADE EMPEROR WITH ANIMALS CAN BE SEEN.

We can’t ignore the fact of the presence of Shiv Lingams in China.

There were many temples in China constructed and dedicated to Lord Shiva but were ruined. And now there are no Lord Shiva temples in China. We must take into consideration about VIETNAM. – VIETNAM, was a part of China.  The Cham Temple Complex, which is part of the My Son sanctuary in Quang Nam province, a monolithic sandstone Shiv Linga was discovered. The Shiva Linga dates from the 9th century. Hence, the link between Lord Shiva and China has been very deep.

We must also look at the fact- The Shiva temple was originally built in 685AD, long back during the Tang Dynasty, but the reconstruction took place by Tamil Hindu Community late in the 13th century, which was dedicated to the Lord Shiva.

THE QUESTION IS -IS THE JADE EMPEROR LORD SHIVA?

Lord Shiva meditated for years and is a yogi- {the practitioner of meditation}. The Jade Emperor meditated in a cave to find himself. Both did it to find the power within and the power of the universe.

In Hindu Mythology and Indian Mythological Stories, Lord Shiva is personified as the destructor. He is called the Kalantaka the conqueror of time and death.  And in Chinese Mythology and Mythological stories, Jade Emperor is also the Lord of the underworld. If we compare both Jade Emperor and Lord Shiva, we realize they were supreme and Gods with complete families. Lord Shiva is believed to be the only Indian God with a complete family and Jade Emperor lives in the heavens above with his family.

Both the Jade Emperor and Shiva are called the CREATORS OF THE UNIVERSE.

In Chinese Mythology and Mythological stories – Sun WuKong- the Chinese monkey God, is similar to Hanuman the Indian monkey god.  Xiàngtóushén Elephant-Head God shares the common factor with the Indian god Ganesha. The links are many, the similarities are even more forcing us to look deeper into the connect of INDIAN MYTHOLOGY AND CHINESE MYTHOLOGY.

0 Replies to “IS THE JADE EMPEROR OF CHINA THE HINDU GOD LORD SHIVA?” 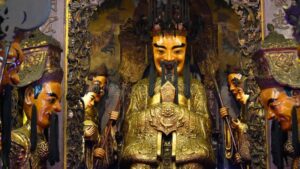 Who is the JADE EMPEROR? Why is he the most important Chinese God?