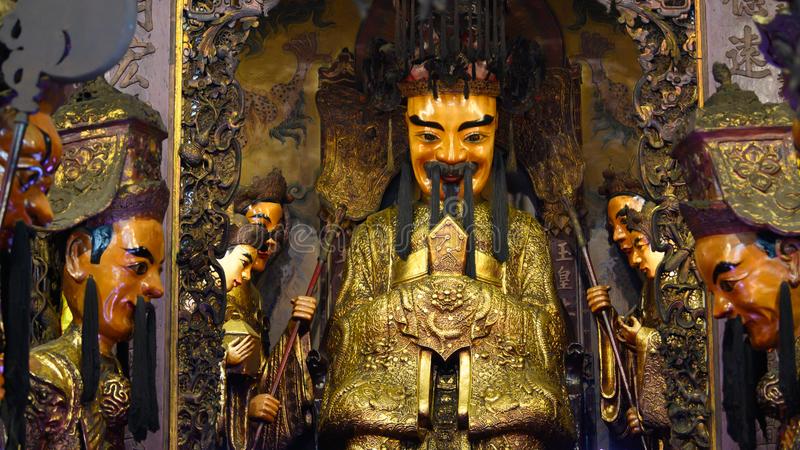 According to Chinese mythology and mythological stories, there are three domains in the cosmos – Heaven, Earth, and the Underworld. Each one has its Gods and Goddesses. If you think just a few. No. It is like a city of these Gods and Goddesses, and over them, there is an Emperor who rules. His name is the JADE EMPEROR. -the most important and powerful Chinese God.

This article will share the JADE EMPEROR MYTHOLOGY, the Chinese Mythological Stories around him, and his evolution, which will help us understand the most powerful Chinese God.

WHO IS JADE EMPEROR AND WHY IS HE THE MOST IMPORTANT CHINESE GOD?

The JADE EMPEROR’s other names are Yu Huang, Heavenly Grandfather, The Jade Lord, or The Highest Emperor.

In Taoism – {Taoism (also known as Daoism) is a Chinese ideology attributed to Lao Tzu (circa 500 BCE),
which influenced folk religion in rural China and eventually became the country’s official religion during
the Tang Dynasty. As a result, Taoism is both a philosophy and a faith.}

He is the ultimate ruler of Heaven.

His father is the king of the Pure Felicity of Majestic Heavenly Lights and Ornaments kingdom. The JADE EMPEROR
was a crown prince whose birthday falls on the first lunar month’s ninth day. There is a belief that at his birth,
there were wonderous lights that filled the kingdom.

In Chinese mythological stories and among Chinese Gods, the JADE EMPEROR is said to reside in the highest part of Heaven,
in a palace with his wife, the Jade Empress, and their large family, along with an entourage of ministers and officials.

How did he get the TITLE OF THE JADE EMPEROR?

As per Chinese mythology and mythological stories, living among the people was a normal man, not yet God, the JADE EMPEROR. He was kind, caring and used his powers to help people. But what saddened him was his limited powers, making him feel that he could not do much for people and humanity. So, he practiced Taoism on the Bright and Fragrant Cliff. There he retreated into the cave to deepen his wisdom for 1750 eons, each eon lasting millions of years. He was tested again and again before he attained the Golden Immortality. Here, I would like to add a point, being an Indian, the same practice of retrieving in a cave was followed by the Hindu Gods to attain the ultimate wisdom. It is a similarity between Hindu mythology and Chinese mythology which we can’t ignore.

When JADE EMPEROR was in the cave, unaware that a demon desired to conquer Heaven and Earth. The monster had also retreated to a cave to increase his powers and faced many trials. After emerging from the cave, the demon raised a demonic army and waged war against Heaven, which Gods knew they had no way to win.

When the war was waged on Heaven, and the JADE EMPEROR finished his journey inside the cave and came out to notice an evil glow emitting from Heaven, he understood something was wrong.  He rose to Heaven. And saw the war between the Gods and the demon and his army.  He realized the demon was too powerful to be stopped by the Gods.

According to Chinese mythology and mythological stories, he challenged the demon, and a massive battle ensued between them. The JADE EMPEROR emerged victorious.  The other Gods in Heaven understood well that it was the JADE EMPEROR who saved them. Hence, they declared him the SUPREME SOVEREIGN.

According to the JADE EMPEROR MYTHOLOGY, he was initially the assistant of the Divine Master of the Heavenly Origin, Yuan-shi tian-zun.

Yuanshi Tianzun is said to be the supreme beginning and creator of Heaven and Earth. He chose the JADE EMPEROR or Yu-Huang, as his successor.

The JADE EMPEROR was succeeded by the Heavenly Master of the Dawn of the Jade of the Golden Door.

There are various theories in Chinese mythology and mythological stories as to how the animals in the Chinese zodiac were chosen. According to one such mythological story, the JADE EMPEROR never visited the Earth, although he was the Supreme Sovereign of all. Out of his curiosity as to how did the creatures on the Earth look like, he asked all the animals to visit him in Heaven. Upon their meeting, the JADE EMPEROR was delighted with the animals and decided to divide the years up.

The Chinese New Year is a significant festival, as per Chinese mythology. Gods are worshipped for good fortunes for the coming year.

It is believed that before the Chinese New Year, every family’s actions are judged with appropriate rewards and punishments. The JADE EMPEROR accomplishes the judgment itself. The final judgment is based on the Kitchen God’s testimony, also known as Zao Jun, a humble deity who spends the whole year in the family’s kitchen, closely watching their acts and deeds. As a result, bribing the Kitchen God with sweets is a common New Year’s tradition.

On the JADE EMPEROR’s birthday, which falls on the ninth day of the first lunar month, the Taoist Temples hold the JADE EMPEROR ritual at which the priests and common people prostrate in front of him, burn incense, and make food offerings.

Conclusion -The JADE EMPEROR was a normal human being. But then he became the supreme king of the Chinese Gods. He ruled over the Gods and Goddesses. Mythology and mythological stories always teach us, any normal human being with his dedication and can become extraordinary.

REMEMBER THE JADE EMPEROR IS WITHIN YOU.

AWAKEN THE SLEEPING JADE EMPEROR, AND YOUR LIFE WILL CHANGE FOREVER.

0 Replies to “Who is the JADE EMPEROR? Why is he the most important Chinese God?” 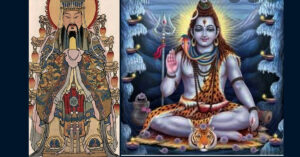 IS THE JADE EMPEROR OF CHINA THE HINDU GOD LORD SHIVA?